Long Way Home is a song that may be facing retirement. There was a time where it was an essential song to me. It was adaptable, at times powerful, at others contemplative.

But it could never escape the fact that it was my attempt at being Bruce Springsteen. 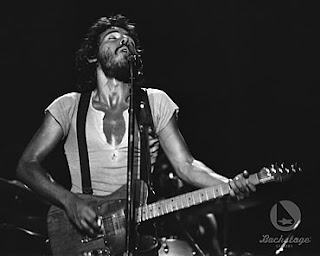 But while my attempt at being Bruce always felt good to play, I was never sure it was quite as good to listen to.

Over time, the song has polymorphed through a number of different arrangements. Sometimes it is a rock song, sometimes a folk song, sometimes a single voice and others a group vocal. It just can't decide what it wants to be. So maybe it is time to let it go.

The song is centered around a couple occupying the same house, acting out the cliches of a successful relationship, co-existing, sitting metres apart in the same house, but a still a long way from home. Like ghosts haunting different rooms. Rattling chains. Attempting to reach the living, but unable to find a way to cross the divide.

When I was younger I became obsessed with finding ways to measure success in relationships. This was based on a twisted set of conditions that ultimately boiled down to not making the same mistakes I percieved my parents and the adults around me making. This obsession in itself became a paralysis. I began to overthink everything. Analyse my performance based on a set of secret criteria that taunted me and teased me when I erred.

Those days are long gone now...but at times the memory of the old voices can creep up on me. They laugh at me in my dreams and attempt to unsettle me, and shatter my faith. In those moments, no matter where I am, home can feel a long way away.

This song is about moments like that. The narrator grasps at solutions - control, entertainment, denial, sex - but finds that nothing can take them home unless the ghosts begin to speak to each other again and agree to find a remedy.