The battle against perpetual self doubt (Side Effect) 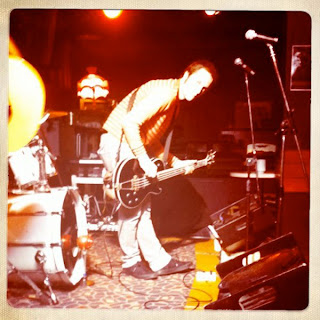 I am part of an international gang. There are millions of us. Perhaps everybody in the world is in this gang.

The only membership criteria is that you are locked in a perpetual battle with self doubt.

My internal monologue seems to repeat itself.

At its high point I feel confident, comfortable and unstoppable. As a song writer I tend  to see the potential in the music I am making rather than looking for perfection. I am accepting of my limitations and even celebrate them. I feel tolerant and balanced. To use one of my wife's sayings, I hold things with an open palm rather than a closed fist. I accept compliments and feel validated by the praise and encouragement of others, trusting them to be honest and true.

Then I begin the descent. I question myself. Begin to doubt that those around me are telling the truth - sometimes perceiving their generosity as deceptive. Almost like they are just placating me. As a song writer I feel absolutely useless. Like I am just a cacophony of mediocre ideas and boring melodies. That my lyrics are over indulgent and insular...offering the audience no way in. I rail against my limitations and dwell on the weaknesses of the set up. I feel spent and isolated in my self flagellation. Holding things with a closed fist, rather than an open palm.

And then it dissipates and I start the steady climb to the top.

I realise how ridiculous I am being. I see through the mythology I have created. It is like I push through the cobwebs, clean the windows and begin to laugh at my own expense.

And start the cycle again.

To be honest, it can be a pretty exhausting way to live...(see black dog).

This song is called Side Effect. I wrote it last Friday. I tried to make it into a rock song. It failed. So I recorded an acoustic version on Tuesday in 40 minutes. It is rough, but I feel it.

The song story is about the cycle of my internal monologue. It is my Smeagol vs. Golem song. It is the glass half empty singing to the glass half full.


I am reading Bob Mould's autobiography 'See a Little Light' at the moment and really enjoying it. He writes with honesty and integrity - and he throws in a big dollop of self critique and analysis. He also writes a lot about catharsis. I relate to that.

I'll admit here that at times my songs definitely are an attempt to purge myself. Wearing it on my sleeve. Selling my pound of flesh.

Then when I perform, I feel like I am a waterfall. I sing and play with a sense of disregard - I often shut my eyes. Am I singing to myself or to the audience? I don't know sometimes. But, there I am. I share the yoke with you. Shake it off with you. I give it all over with an open palm.

...having just read back over what I have written, I feel suddenly hesitant to post it. But what the hell...this is meant to be a song confessional...