Def Leppard and me (Compu Global) 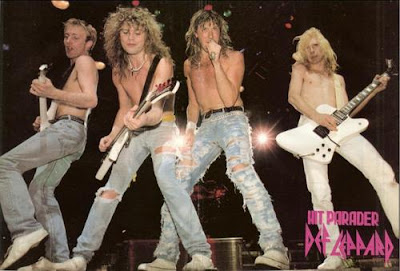 Before I could even play a single chord on the guitar, my oldest friend Craig Ireson and I came up with a band name, a list of songs and a breakdown of who would play what in the perfect lineup.

We were going to be called Cloak n' Dagger, I would learn guitar, he would sing and my friend (soon to be step brother) Michael would play keyboard. We figured that he could also be the drummer as the keyboard had built in beats. We were going to cover songs by Poison (Fallen Angel), Skid Row ('18 & Life'), Cinderella ('Bad Seamstress Blues')...you get the idea.

In my defence, I was twelve or thirteen years old, had a poster of Chuck Norris on my bedroom wall and lived in Rotorua. 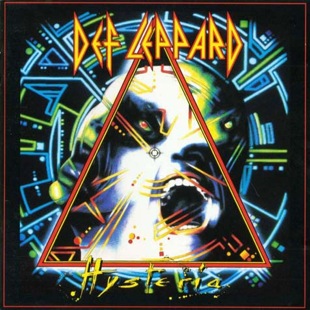 We had few original song ideas as well, but the real ace up our sleeve was going to be Def Leppard's Hysteria. I absolutely loved that record.

Cloak n' Dagger never actually did anything other than talk about being in a band. We drew album cover art and wrote detailed setlists for concerts we never performed. Craig and I went on to form CIAO (Craig Ireson's Alternative Orchestra) - a band that recorded well over 20 hours of improvised stuff & nonsense. Some of it was genius, most of it was just sheer obnoxious frivolity. But it set me off on learning how to play the guitar.

Def Leppard was a constant though. In those early days we ripped our jeans, put patches on denim jackets, lip-synched at the intermediate school talent quests (or was that GnR?). I remember in the late 1990s being at my old friend Nick Franich's house in Abel Tasman Street. We were both in our early 20s and had left Def Leppard behind for Radiohead and the usual 'alternative rock' fare. I was looking through his cassette tape collection and found Hysteria hidden underneath a pile of the more credible additions. After a moment of hesitation we self-consciously put it into the player. Just over an hour later we had finished listening to the entire album from start to finish - an air guitar sing-a-long - and a reminder again of how deeply embedded the guitar line from the title song was buried into my subconscious.

Without shame, I can say that that album and the song 'Hysteria' has never been far from my mind. The little repeating guitar line has creeped into my original compositions on so many occasions, I have decided to stop resisting it and celebrate it instead.

The song below is called 'Compu Global'. It was named by Nick Franich as I didn't know what to call it. We were playing together in Chopper at the time. If I recall correctly, I believe he got the inspiration for the song title from Homer Simpson. Anyway, there is no doubt in my mind on listening to this track that Def Leppard has their fingerprints all over it. Check out my derivative guitar line during the verse...

This first version is recorded live at the James Cabaret in 1999. Chopper was just starting to really gel as a band. This was the opening song of the set.

Compu Global (Performed by Chopper Live 1999)
(Words: Andrew Savage Music: Savage, Schulz, Franich & Wise)
This version of the song was recorded with Richard Wise and Jared Schulz in 2009. We never mixed it, but had fun reminiscing. Jared stepped in for Leon and I tried to play Nick's bits on the guitar. I couldn't...
The images are from a Chopper show at the Wellington Town Hall.
Compu Global
(Performed by Savage, J. Schulz and Wise in a practice room 2009)
(Words: Andrew Savage Music: Savage, Schulz, Franich & Wise)