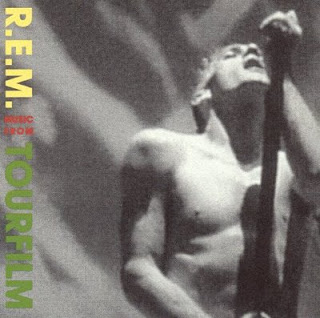 On my fourteenth or fifteenth birthday my father bought me a copy of REM's Tourfilm. I remember watching  Michael Stipe perform poetry in between songs and I fell for it immediately. He has this knack of capturing a sentiment in a sentence and then weaving enough mystery into it to leave you wanting. We watched the concert film in the backgroung during the birthday party. I was enthralled. There was drama about it. And it made me start to really think about the lyrics of songs.

My favourite line of poetry from the film was:

Pacific Coasts: The closer I get, the further away I feel.

It seems to me like the speaker is celebrating what could be at the same time as grieving what has gone. I really like that idea.

My oldest friend Craig and I had lunch together last Friday. We had not seen each other for some time. But it was a sort of homecoming for me. If it wasn't for Craig, I don't think I would have been as involved in performance arts. He made me audition for plays. He made me play guitar in his super group CIAO (even when I didn't know a chord). He forced me to embrace my imagination. He could make the mundane seem important. Our schoolboy antics were always seen through a magnifying glass.
Over lunch we talked about all manner of things...including the Violent Femmes.
﻿
﻿

Craig reminded me of their greatness. The way that they championed passion over production. In the 1980s, in the face of the all the studio trickery and the stadium rock juggernaut, the Violent Femmes kept our feet on the ground. As teenagers we ate up the nastiness and lust of Gimme the Car. We loved the evil that is Country Death Song, and the joy of American Music.
They seemed to swing on some crazy pendulum between adolescence and adulthood, lust and love, hurt and hope. Belief and doubt. Life and death.
It seemes to me like they embody the idea.
The closer they get the further away they feel.
So, courtesy of a lunchtime discussion, Michael Stipe's poetry and the stripped back vulnerability and vision of the Violent Femmes, here is a song that deals with those tensions. It is a theme I fear I will continue to repeat. It's all a bit earnest, but I can't help it. I'm just playing the cards I was dealt. I am what you get.

The song is called Yesterday's Sun. It was written and recorded on my 8 track last Sunday. The key line for me reads, "I cried a little bit, for the dream. I got by a little bit, on the dream." The idea is related to the realisation that it is hard to sustain yourself on hope alone. Sometimes you want something tangible.